Rasterization is a process used by GPU to convert your line or triangle call into multitude of pixels on user screen. 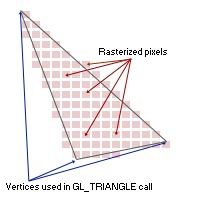 When you issue a call to draw a triangle, you supply 3 vertices, which are converted to 3 pixels on user screen and then pixel-by-pixel, line-by-line - the triangle is drawn, using pixels on users screen.

Actually, it's done in parallel using many processing units available on GPU, so all (or most) of these points are drawn at the same time by up to 17000 "processors". They are going through many stages, like stencil testing, depth testing, alpha testing and alpha blending.

Each of those pixels also have z coordinate value, which doesn't appear directly on screen, but is used for depth testing.